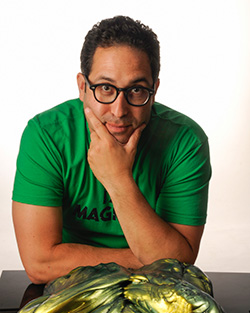 This year’s featured alumnus is Aaron Muderick ’98. Aaron worked in the computer consulting industry after graduation, but has since found more enjoyment in his current endeavor, Crazy Aaron’s Thinking Putty (www.puttyworld.com). Those who remember Aaron would not be surprised that he’s ventured into something off the beaten path.

How did putty become such a focal point in your life?

AM: After graduation, and in the midst of dot come mania, I was a software engineer building web applications. Most of my colleagues were about the same age and our office was classic geek Nerf guns all over. Quake matches every afternoon. I even had a Maquarium (old Mac SE turned aquatic home) in my cube.

I wanted to step things up a notch and impress my coworkers with my true inner geek, so I decided that the coolest thing I could do was buy 100 lbs. of bouncing putty stuff and bring it into work. I had always had a “can never get enough” thing with those tiny eggs and I thought, maybe 100 lbs. would quench my thirst for it. Well after I dropped the 100 lb. lump on my buddies, they all wanted their own piece. In a few days, the whole 100 lbs. had been cut up and sold. Hmmmm, I thought, maybe there’s something to this putty!

Most upper-class CSC students would tell freshmen to never procrastinate on homework assignments. Was Crazy Aaron’s Thinking Putty developed as merely a procrastination instrument from your consulting work?

AM: It definitely became that. After the dot com bomb the kind of consulting work I was doing got a lot less interesting. My clients were taking fewer risks overall and the systems I was designing weren’t challenging. I found that after a full day of slogging away at ode I hated, it was hard to focus my ideas on my own software ideas at home. I needed to detach myself from the keyboard for a while.

What experience at URCS gave you the courage to become an entrepreneur?

AM: What I learned in the URCS program was that it takes a long time to go from idea to completed invention. By watching the progress of different professors’ research over four years, I really got a sense of how long it took to think out all the angles and all the variables on a complex problem. It really gave me a sense of patience that I needed to get Thinking Putty off the ground. The end product seems simple enough. But I had to explore so many different possibilities and test each one before I could reach the end result.

Your website shows that avid putty fans are quite creative with their use of putty. What is your favorite way to pass the time with putty?

AM: Everyone does something different with their Thinking Putty. Back when I was consulting, we used to pass the stuff out at kick-off meetings with new clients. We’d observe what they did with it, construct a little pop psychology profile, seal it in an envelope, and allow the business relationship to proceed. Well darn it, what people did with the stuff really says a lot about them as people.

You have your sniffers (they don’t touch, just sniff it and then put it down), your hand washers (touch it to be polite ad then run to wash up), your model makers (they take I and immediately sculpt some crazy creature, your imitators (they sculpt right away but always something recognizable like a Disney character, your engineers (making geometric shapes and then endlessly straightening them as the putt melts,) your poppers (they quickly discover you can catch air bubbles in it and make bubble gum popping sounds during meetings), your stretchers (they get hypnotized by how it can become as thin as spider silk when you stretch it), your squeezers (just kneading away in their hands), and a few other types.

My favorite thing to do (and the best ‘perk’ of the job) is to lay out about 500 lbs. and take a nap on it. Sounds silly. The stuff molds to your shape, is cool to the touch, and is actually pretty comfortable. Maybe that’s why so many kids fall asleep with it in their hair.

Do you have a vision for the future of putty?

AM: The vision is simple: To make the world a better place by spreading the love of putty. Putty s fun. Putty makes people happy. Putty breaks down social barriers. I have lots of customers who use it when the office from Seattle has to meet with the office from Japan, and they don’t speak the same language. It sounds corny. The future is more people, more fun, more happiness. I believe Thinking Putty can make the work a better place.

OK, I lied. The future is Total World domination through the use of mind control agents I place in each lump of Thinking Putty. Ack! Did I just say that out loud?

I’m sure that developing a putty empire has been a “stretch” for you both emotionally and financially. What has been your biggest challenge?

AM: “Putty Empire”, hmmm, I like the sound of that…

I always have faith that the money side of things will take care of itself. That’s not to say that starting a business and taking on so many financial risks isn’t terrifying (it is!). the biggest challenge was making the decision to leave ‘computers’. Obviously, I had invested a lot of hard work (and years) in software and computing. It was a big mental leap to go from Thinking Putty as a side business toward making it the whole pie.

What advices would you give to CS students looking for something unconventional for their life’s work?

AM: Go for it! Obviously.

Just remember that ideas are a dime a dozen and actual execution is everything. If you are really really into your idea, that force of believe will rub off onto others and start the snowball rolling down the hill. Be honest with yourself though, if you’re not that passionate, maybe you should find another idea (it’s a good source if you need a creative jumpstart!). Remember if you want to be the best at what you do, then do something no one else is doing. You can start out at the top!

AM: Sometimes you don’t realize you’ve been exposed to something really great until you leave it behind. After I graduated and started working with CS graduates from other schools, I was amazed that we really hadn’t taken the same classes. So many schools had taught CS with a “software for business” focus: “here’s how to write software for the big company you’ll work at one day”. The theory and foundations of Computer Science that I learned at URCS got me thinking on a different level. It served me well when I was designing software and it still serves me today.