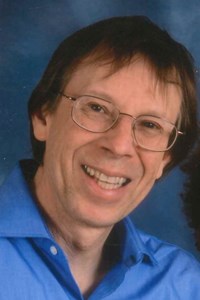 It is with great sadness that we report that Prof. Randal Nelson passed away on April 19, 2020.  Prof. Nelson had been undergoing treatment for cancer, but had been active in the department throughout, and his death was sudden and unexpected.

Prof. Nelson joined the department in 1988, and was a prominent researcher in the area of computer vision.  Much of his work focused on recognition of objects and actions for real-time control in robots.  He advised a total of seven PhD graduates at Rochester.

Many will remember Randal as a teacher; he impacted every incoming PhD student for many years by teaching the introductory graduate seminar CS 400, which he approached as an introduction to the culture and practice of research in computer science.  He also developed a number of unique classes for undergraduates.  His Robot Construction class was an intensive team experience in which students designed and built a new robot design from the ground up each year.  One year's robot moved like a snake, while the next's was a spheroid blob that was able to roll along the ground by slightly expanding one side while contracting the other.  Randal's class on Creative Computation aimed to give students a seat-of-the-pants engineering sensibility through back-of-envelope estimation problems. (Quick-- do you have any atoms in your body that were once part of Julius Caesar?)

Randal contributed to the life of the department in many ways, and in particular he volunteered to lead the committee for PhD admissions for many years.  This is probably the most labor-intensive committee assignment one can take, given the huge number of applications to read and consider.  It is also the most vital to the future of the department, and Randal always strove to build a balanced and cohesive class.  He believed that the department should put the interests of its students first.

Randal played in our department's very own rock band, the Algo-Rythms, with Ted Pawlicki, Chris Brown, and Marty Guenther. He was always an interesting person to talk to in the hallway, whether it was about scanner technology or his latest personal projects that ranged from cataloging wildflowers to smelting iron from sand in a home-made furnace.  He leaves a void that will be very difficult to fill. ​

In memory of Randal, and in recognition of his commitment to recruiting and retaining the very best graduate students, the department has established the Randal Nelson Graduate Student Fund.  Our goal is to raise at least $25,000, to create a self-sustaining endowment in support of URCS graduate students — for research funding, academic fellowships and awards, conference attendance costs, etc., as determined by the department chair.  Donations in Randal’s honor can be made at http://uofr.us/nelson