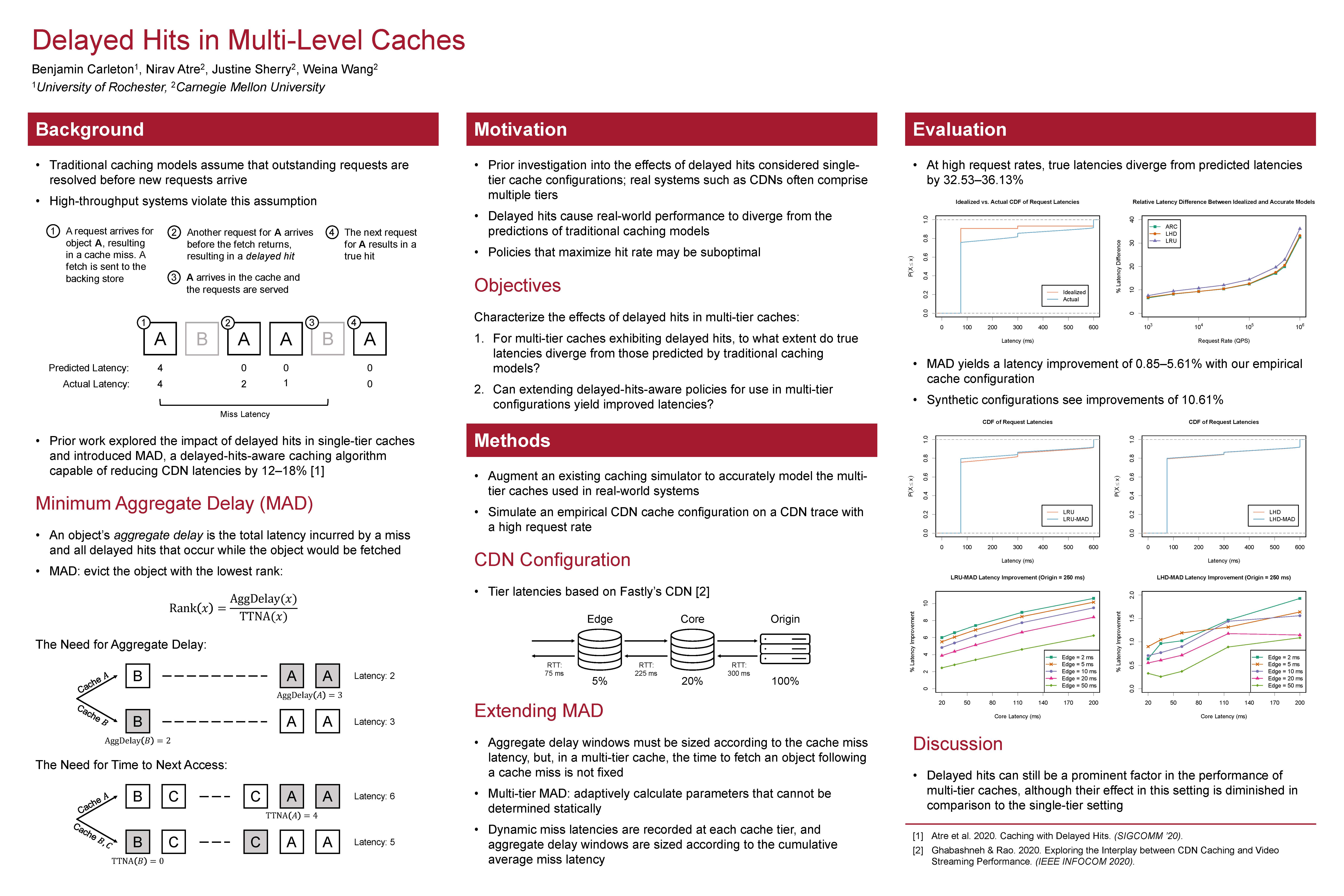 Benjamin’s work is entitled “Evaluating the Impact of Delayed Hits in Multi-Level Caches”. Prof. Sherry explains, “Caches are computer systems that keep data close to where it needs to be used, making services faster. For example, on the Internet, many companies store images and videos in servers close to homes and businesses to make services load faster for users. These caches can be made faster using a new algorithm we developed called MAD that exploits a phenomenon called ‘delayed hits’”.

Benjamin analyzed MAD by simulating a realistic caching setup that contains multiple tiers of caches as used by a major Internet content provider in contrast to the original MAD analysis which only looked at configurations where there is one cache. By analyzing different Internet settings and deployment models, Benjamin showed that MAD still made things faster, but the speedups were only 25-30% as good compared to the single-tier case. Nirav Atre, the CMU graduate student who mentored Benjamin notes that “exhibiting a research maturity far beyond his years”, Benjamin “found the right parameters to use in his model, performed a thorough sensitivity analysis to identify trends in the results, and presented plausible hypotheses explaining a few interesting outliers he discovered.”

Prof. Sherry adds, “These results are very useful! I'm really excited to go back to some of our collaborators at Internet content providers and tell them about Benjamin's work.”

The SRC committee concurs, “Benjamin’s work extends recent work on the effect delayed hits have on cache efficiency to multi-level caches. His work builds and validates detailed analytical models for this setting, thus providing an invaluable foundation for developing caching polices to hierarchical caches. Benjamin’s presentation demonstrated the depth of knowledge he possesses about this area and the confidence he has in his results. The SRC PC believes that the depth of Benjamin’s work is an excellent representation of the kind of research done by SIGOPS members and that his work would represent us well in the ACM wide student research competition.”

Benjamin will now advance to the 2022 SRC Grand Finals.