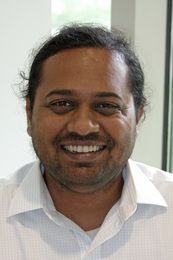 Sreepathi Pai's work will improve the performance of large-scale volunteer computing systems such as Einstein@Home and Folding@Home. These systems allow computer users all over the world to donate time on their computers to solve important scientific problems. The computational power delivered by these systems has now begun to exceed 1 exaflops, which is one quintillion (10^18 or a billion billion) arithmetic operations per second, mostly driven by Graphics Processing Units (GPUs) putting them on par with some of the most powerful supercomputers in the world. Pai will develop new automatic performance tuning algorithms for Graphic Processing Units (GPUs) to improve the efficiency of programs that will run on hundreds of different kinds of GPUs found in these systems. The efficiencies gained can be likened to getting thousands of GPUs for free.

As part of the award, Pai will also work with the Upward Bound STEM program housed in Rochester's Kearns Center to introduce computer programming to students with little exposure to programming. In addition, he will work to aid the preservation mission of Strong Museum of Play's International Center for the History of Electronic Games (ICHEG) for games that use GPUs.

About the CAREER program

The Faculty Early Career Development (CAREER) Program is a Foundation-wide activity that offers the National Science Foundation's most prestigious awards in support of early-career faculty who have the potential to serve as academic role models in research and education and to lead advances in the mission of their department or organization.

More details about the award can be found on the NSF website.