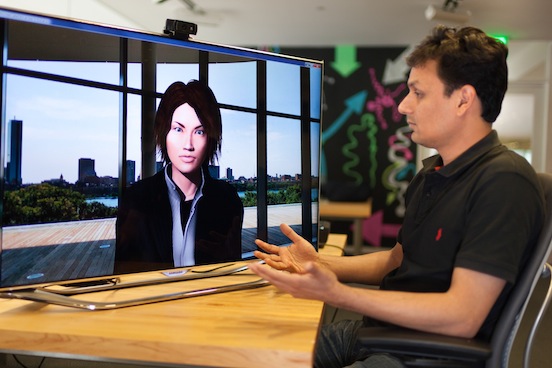 The system, called MACH (My Automated Conversation coacH), consists of an animated character that can see, hear and respond in real time.

"MACH offers the possibility for people to practice social interactions in their own home, without anyone knowing, as many times as they need and review their performance," explained Hoque. "This addresses requests we had received from people who struggled with social interactions, but feared the social stigma of seeking help from other individuals."

As an initial proof of concept, MACH was designed to help people with job interviews. The MACH "interviewer" can ask questions and respond to the user. It prompts the user if the answers are too long-winded or if the user is silent for too long. The system also tracks if good eye contact is maintained, the tone of the voice and how it varies, and if filler words (like "umm" or "so") are overused. The user can then review these characteristics and watch a video replay.

Hoque developed the system during his time as a graduate student at MIT and tested the program in the context of job interviews with 90 MIT undergraduate students. Hoque and his collaborators found that students who practiced with MACH demonstrated an improvement in interviews compared to the control group.

The work will be presented at the UbiComp conference in Zurich, Switzerland, on Thursday, Sep. 12, where the paper was one of 92 papers accepted out 392 papers submitted and one of five to receive a "best paper" award.

Hoque joined Rochester's computer science department this semester as assistant professor and plans to continue expanding the technology to address possible behavioral health issues, such as helping people with Asperger's syndrome, social phobia and post-traumatic stress disorder. The program is part of Hoque's wider work on human-computer interaction and affective computing, an area of computer science that focuses on improving the ability of computers to understand human emotions.

At the same conference, Henry Kautz, chair of Rochester's computer science department, won the "10 year impact" award for the most cited paper from 10 years ago.

Hoque collaborated with his adviser, Rosalind W. Picard, from the MIT Media Lab, Matthieu Courgeon and Jean-Claude Martin from LIMSI-CNRS (France), and Bilge Mutlu from the University of Wisconsin–Madison.